Once upon a time, the role of bass was so much simpler than it is today. I tell you this from experience, I did my first professional gig playing bass in 1963. Most who are reading this, probably not alive at that time I am sure. I am not sure why I was attracted to bass. One of the reasons I can tell you is that I had two friends who played guitar along with myself. So one of them came in to our little jam session with a boogie bass line. When I heard how that line sounded against the guitar chords, I was sold.

In the 60’s, bass guitar was relatively a new phenomenon.  There were no teachers.  If you wanted to study you would have to settle for a guitar teacher.  There was no respect for the instrument.  I remember a alto sax player saying to me “can you even tune those things?”

On the other hand early rock and roll who commonly used upright bass was embracing the electric bass and believe it or not, jazz was also.  Many jazz artists were hiring hiring electric bassists or insisting that their upright bassist change over to electric bass.  I guess the band leaders were attracted to the electric bass because of the crisp definitive sound as well as being perfectly in tune.  It is not that the upright can not be played in tune.  But intonation can definitely can be an issue, not so with electric.  So there I was, big demand for electric bass, no where to learn it.  Tones of gigs everywhere.

Monk Montgomery, came from a musical family.  All his brothers and sister played instruments.  His brother, Wes Montgomery became very famous in Jazz guitar history and still imitated and studied by guitarists to date.

Monk played upright bass initially.  In 1953 he took up the electric bass and got on Lionel Hamptons band.

I remember in my early quest on finding out more about electric bass discovering Monk.  I ran out and purchased this album. 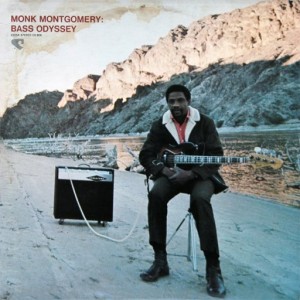