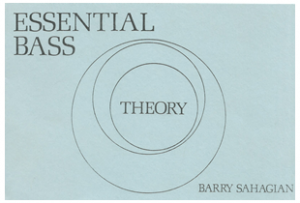 I have to say this book has helped my students most of all. I have heard teachers scoff at studying theory. Learning music theory can immediately make you a better player by simply understanding how, where and why things work. This theory book not only unlocks how keys work, lines and rhythm, but actually applies the theory to bass lines included.

The musical alphabet contains the letters A-G ( A, B, C, D, E, F,G ). Between the letters E and F and the letters B and C there is only a half step. You can see this clearly on the piano. Notice there is no black keys between B and C and E and F.

The major scale is divided into two four note units called tetrachords. A tetrachord is comprised of two whole steps and half step. The two tetrachords have a whole step between them.

Building the tetrachords on any note other than C, will create accidentals, also known as sharps and flats. This is the basis of music theory. This is how you can understand what a key is and why there are sharps and flats and how they fit into the whole music theory equation. Please continue on there is much more to learn.

The Key of F

Here is the key of F. The key of F has one flat. The reason is because when you place your two tetrachords starting on the F note, the fourth note (B) has to be flatted to fit in the lower tetra chord. So the key F has one flat Bb. Stay with me on this and you will start to see a pattern. So right now we have the key of F. It has one flat on the 4th degree of the scale F,G,A, (Bb).. this is all you need to know at this time. We continue and you will start to see how this all works.